Horses vs. oxen. A comparison of draft animal power

Agriculture at the start of the twentieth century was still almost entirely reliant on manpower and draft animals, and it was only from the 1950s onward that the tractor would become the undisputed champion in the countryside in Italy and elsewhere.

By animal power, we’re primarily talking about horses and oxen, and both of these animals had their own strengths and shortcomings which, over the centuries, would determine great shifts in their respective popularities.

The usage of horses in agriculture came much later than oxen, and first appeared over 2000 years ago when ancient farmers wanting a faster means to plough and to transport their harvest to market switched over to breeding horses for riding and draft. But it was in the Middle Ages that the horse started to assume a major role in agriculture, and the appearance of reins and horseshoes around the year 1000 made it more effective to yoke and use horses to draw heavier loads. The horse now started to rival the ox, as its more muscular build and strength could be put to work to turn soil over much more quickly, tilling many more rows in the same time and increasing productivity. In the 16th and 17th centuries, it was commonly said that “a horse moves more earth in one day than an ox can in four”. However, a horse was worth a small fortune compared with an ox – costing three or four times as much as an ox to maintain, only the rich could afford to own one. And while the ox could live quite happily grazing grass alone, a horse had a penchant for oats and also had a less resilient constitution than the tireless ox. To this, experts of the era also added that “an injured or old ox can be fattened to be sold or butchered, but when a horse is old and tired out, all you can do is put it down”. And so it was that these animals were the indispensable power source for the farmer up to the end of the 19th century, and one can only sing the praises of these humble beasts, who shouldered the burden of even the most tiring task without stopping, plodding along at the same placid pace all day. 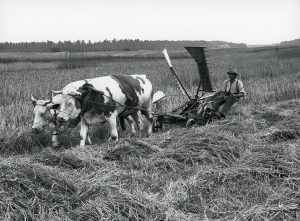 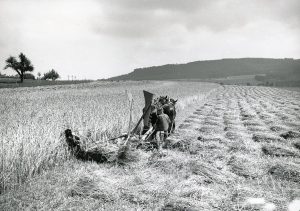 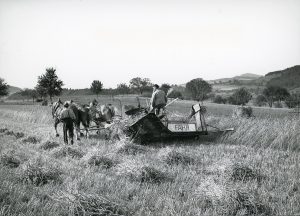 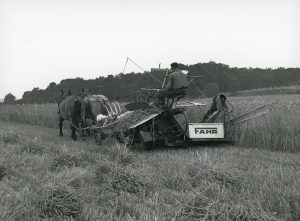 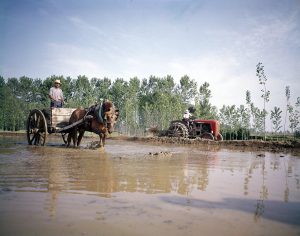 In the period between 1880 and 1940, the majority of farms used draft animals: with the ox still a popular choice but a marked rise in the use of horses. It is estimated that in the 1930s, almost 3 million horses and 1.5 million oxen were at work in Italy.

Essentially, rural populations used to always having oxen were reluctant to replace them completely – and while they were undoubtedly slower than horses, they were constant and capable of extremely hard work, especially in difficult terrain conditions. As a result, farmers continued to use teams of horses, oxen and even donkeys well into the 20th century.

It was the widespread arrival of the tractor which would eventually force them out of their role as protagonists, although animals are still used in agriculture today in certain areas for special tasks.