The yellow gold of spring

This time of the year, when the fields are painted in vivid yellow by rapeseed blossom like the work of an artist, is the perfect opportunity for us to show you a collection of recently discovered photos catalogued and kept at the SDF Historical Archives. These photos depict a SAME Silver 180 at work in the fields around Crema, a Lamborghini Strike 120 in the countryside near Pavia and a DEUTZ-FAHR Agrotron 165.7 in Bavaria. 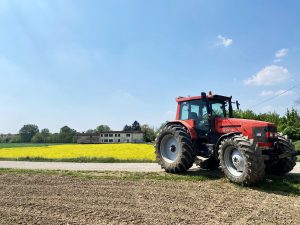 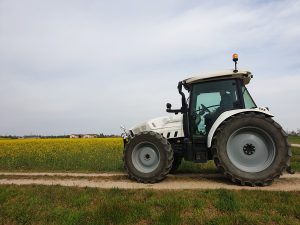 Did you know that…?
Also known as colza (derived from the Dutch word Kolzaad, which means “cabbage seed”), rapeseed is a natural cross between cabbage and turnip. Cultivated since antiquity in Asia and Eastern Europe, rapeseed first appeared in Western Europe in the 17th Century, where it was initially grown in Germany and Scandinavia and shortly thereafter in Italy and France. It is an annual or biennial herbaceous plant belonging to the brassicaceae family, with a stem reaching over a metre in height and yellow flowers in clusters. Spring and winter varieties of rapeseed are grown – the former sown in later March or early April and the latter generally sown at the beginning of October. The seed is then harvested with specifically configured and equipped combine harvesters.

The harvested seed of the rapeseed plant is pressed to obtain a yellow oil with a relatively pleasant aroma which is used for soap production, as lamp fuel and to produce environmentally friendly bio-diesel fuel for vehicles. The waste from the pressing process is rich in protein, making it an excellent livestock feed. The flower of the rapeseed plant is also highly attractive to bees, and rapeseed blossom honey has a fresh and intense flavour.

The world’s biggest producers of rapeseed are China, Canada and India, while France and Germany are the largest producers in Europe.